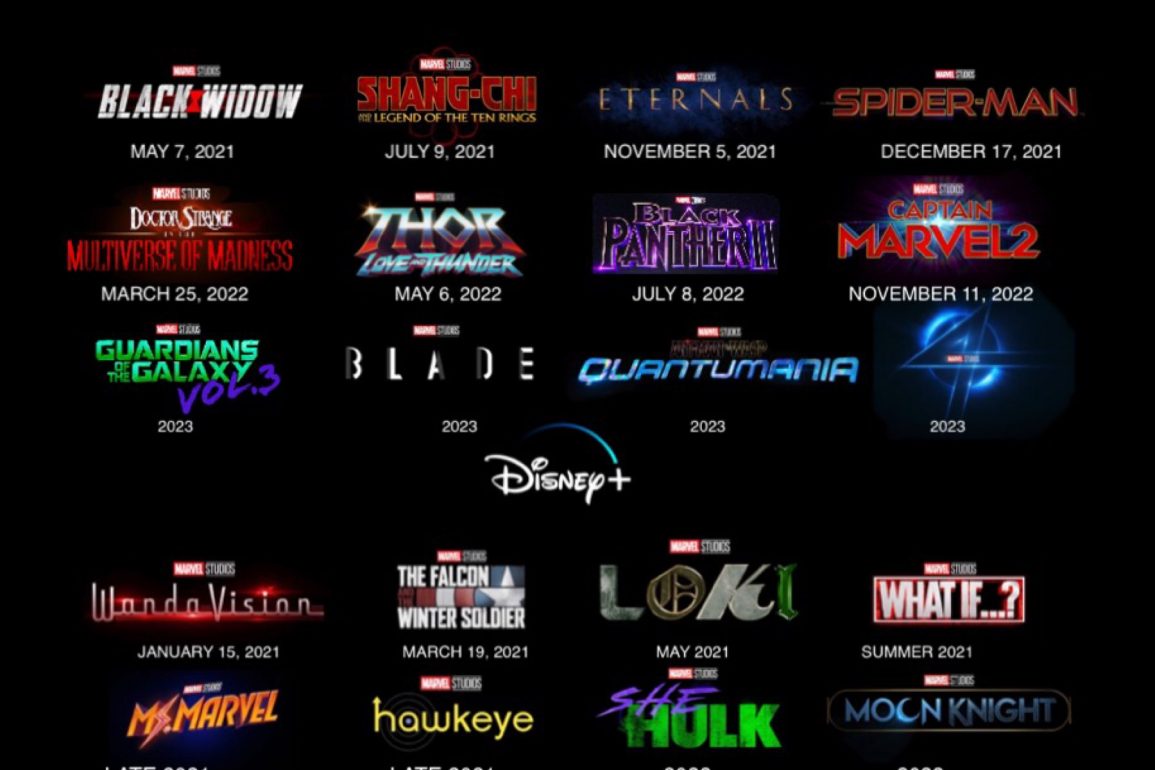 2020 is the first time without a single Marvel Studios film in the theatre. The year was meant to be conducted in Phase 4 of the Marvel Cinematic Universe. But because of the worldwide pandemic, the company’s momentum stopped. The release dates were postponed with theatre closures, safety concerns, and production shutdowns.

Phase 4 will be coming on small screens next year, with the Disney+ series WandaVision releasing in January.

The series will have Wanda and Vision in a “1950s” setting, suggesting that the series may be taking its indication from the 2015 Vision comic book. The Vision created his ideal nuclear family, but it goes very wrong. At a presentation last August, the writer said that  the show would be “half-sitcom” and “half MCU adventure.” An ad aired revealed Wanda and Vision will experience multiple eras, including the ‘70s and ’80s. Meanwhile, Monica Rambeau will be there, likely to bring her back to the present. A recent trailer also revealed that Debra Jo Rupp and Fred Melamed would cause trouble for Wanda and Vision in their 1950s ideal home. One thing is sure that she knows Vision is supposed to be dead. The series to be coming in early 2021.

The movie will feature David Harbour as Alexei, O-T Fagbenle as Mason, and Rachel Weisz as Melina. The plot includes Natasha Romanoff returning to the former Soviet Bloc to deal with the unresolved issues. The movie may be a phantasm as Nat’s soul rests on Vormir. The film will serve as a flowing of the baton from Natasha to Yelena and for Scarlet, who will soon leave the Marvel Universe after the project. Disney announced that they were postponing the film’s release due to the coronavirus outbreak and announced a new release date of November 6, 2020. On September 23, Disney moved the film to May 7, 2021 – a year after its original release date.

3.SHANG-CHI AND THE LEGEND OF THE TEN RINGS

Destin Daniel Cretton will be seen directing this mega film based on Marvel’s comic book. In the story, Shang-Chi was the son of the villain Fu Manchu. After learning the truth about his dad, he used his martial arts against his father and any other baddie. Marvel announced the full title of the film and the release date replacing the guess of the Black Panther sequel and the cast, which includes Simu Liu as Shang-Chi. As Disney considered shutting down active productions. Cretton self-isolated himself on March 12 while the shooting of the second-unit continued. His test results were negative, but the production completely shut down the next day. In  April, the release was pushed to May 2021 to assist the stopped production. In September, the film shifted the dates again from May 7, 2021, to July 9, 2021.

4.THE FALCON AND THE WINTER SOLDIER

The series will deal with Sam (Mackie), who is deciding to pick up the shield that was given by Steve Rogers in the film’s closing moment. He and Bucky (Stan) will also attempt to join mainstream society. Emily VanCamp will also return as Sharon Carter, while Daniel Brühl will return to his role as Zemo, the man who brought down the Avengers. Wyatt Russell joins as John Walker, who is the U.S. Agent of Marvel Comics fame. He will be positioned as a replacement Cap. Production of the film began in 2019 with a fixed scheduled release in August on Disney+, but because of COVID-19, the production was delayed. Marvel and Disney decided to bring up the series in 2021.

The story of Loki will follow the version of the character who escaped from custody in Endgame with a copy of the Space Stone. It seems like he will get access to time travel, and this will likely be the series to examine what it means for the MCU going forward, although Disney+ seemed to suggest Loki will again find himself in a prison cell. The cast includes Owen Wilson, Sophia Di Martino, and Gugu Mbatha-Raw. As with other  Marvel Disney+ productions, shooting was interrupted.

The film will center on an Eternal named Sersi (Gemma Chan) with the powers of aviation, strength, immortality. The cast members include Richard Madden as Ikaris, Brian Tyree Henry as Phaistos, Salma Hayek as Ajak, Lia McHugh as Sprite, Don Lee as Gilgamesh, Angelina Jolie as Thena, and Kit Harington as Dane Whitman – a.k.a. the Black Knight. The film will also feature the first real attempt of Marvel at including gay characters, as Henry’s Phaistos will be married to a man and raising a child. Disney moved the film to November 5, 2021 after the delay.

It seems that Spider-Man would blow out the MCU again to face off against Venom. Sony Pictures and the Walt Disney Studios together agreed to produce the third film. The film is expected to be called “Spider-Man: Homeless.” Fans can see the web-slinger clearing his name while avoiding those who would bring him in.  Avengers might be active. The production was shut down because of the pandemic and has again started shooting, and soon the film will be released.

What if…? is Marvel Studios’ first push into animation with each episode addressing a different outcome. The next episode will feature the voice of the late Chadwick Boseman. As this is an animated series, the production of this was delayed because of COVID-19, but it is still on track for the 2021 release.

The series will be introducing the popular teen Inhuman to the MCU. Bisha K. Ali was revealed as the series showrunner.  All the details of the film are not revealed. Production is already going on. The program is on track for late 2021 release. Ms. Marvel fans have waited for ages.