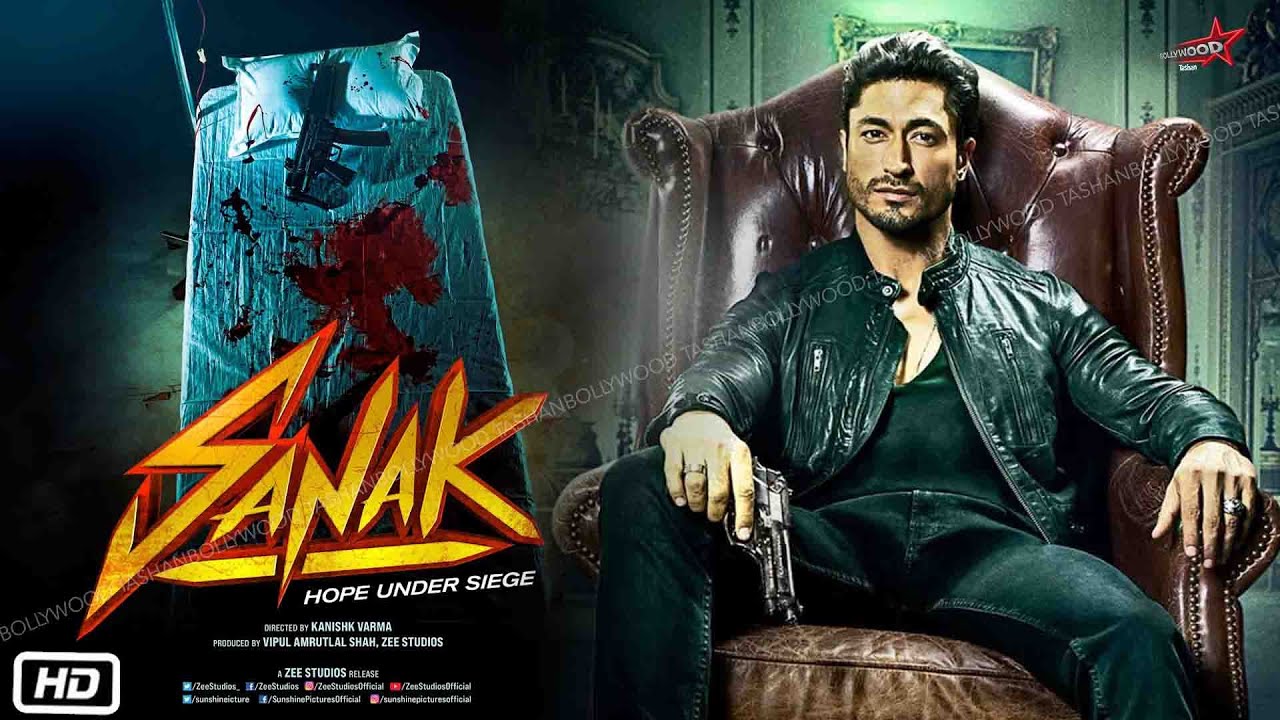 Today we are going to talk about an upcoming movie, ‘Sanak.’ However, earlier today, the poster of the movie is released, and fans are already drooling over it. This will be an action, mystery thriller movie. Thus, the trailer of this movie is expected to release on the 26th of January 2021 Tuesday. The poster, which was released on 24th January 2021, depicts an operating table smacked with blood and a gun. It also says: Hope under siege under the grand title.

Nevertheless, this is the 5th time Vidyut is collaborating with filmmaker VipulShah. Shah is also producing the movie. Earlier, Vidyuthas worked with Shah in movies like Force and Commando. The Zee Studios are distributing the rights so that they can release them on the OTT platform of Zee5.

After wrapping up from ‘Khuda Hafiz chapter II,’ Vidyut is all set to promote his upcoming action-packed thriller ‘Sanak.’ He writes on his Twitter handle, “When love is in danger, nothing can stop the rage!” tagging his crew members. The director of this movie is Kanishk Varma. Moreover, earlier, he directed Gulshan Devaiah starring ‘FootFairy’ and Amazon Prime drama ‘Inside Edge.’

As soon as the poster was released and the movie was announced, fans are super excited to watch it. Here, you will find popular actors like Vidyut Jamwal and Tollywood actress Rukmini Maitra. Moreover, this is the debut film of Rukmini in Bollywood. However, as the poster suggests, it is going to be an adult film.

To talk about the date of release, the movie ‘Sanak’ might release on 12th February 2021. However, no official statement is made on this by the filmmakers. However, the trailer is set to release on 26th January 2021. This is confirmed by Vidyut himself, as he mentioned on his Instagram. The director, Kanishk Varma, also wrote on his Instagram page: “Brace yourself, something big is coming tomorrow!”

In the upcoming movie, some of the talented actors will be seen. As of now, only four are confirmed to be in the lead roles. They include Rukmini Maitra as the opposite of Vidyut Jamwal. Moreover, Neha Dhupia and Chandan Roy Sanyal will also be seen in the main roles in the movie. Earlier, Rukmini worked in Tollywood movies, including Champ, Cockpit, and so on. Being a popular face in the Tollywood industry, she will be a new face on the Bollywood screen to look upon. Vidyut, as we know, has worked on many action films with the producer Vipul Shah. It includes the much popular ‘Commando.’

Chandan Roy made his acting debut with the critically appreciated ‘Rang de Basanti.’ He will also be seen in a prominent role in this movie. Before this, Chandan was seen in the recent controversial web series on MX player, called ‘Ashram.’ Furthermore, Neha Dhupia, who was last seen in a 2020 short film ‘Devi,’ will also star in the movie. As of now, these are the only cast members that are confirmed. The director, Kanishk, directed an Amazon Prime drama ‘Inside Edge.’ He also worked with Gulshan Devaiah in ‘FootFairy.’ Moreover, Vipul Shah is recently doing his debut web series, ‘Humans.’

The storyline of the movie is quite vague as it appears. It is going to be an action thriller with a twist of the love story as the poster suggests. No such storyline reveal has been made, but fans are already predicting the synopsis of the movie. Reports suggest that Sanak will have exotic scenes to witness. However, the makers of the movie are zipped about the characters and plot of ‘Sanak.’ Some are predicting that this will be a murder mystery. Also, the story will pivot around the protagonist’s love interest with lots of twist waiting ahead.

To sum up, this is the news till now that is revealed by the makers of ‘Sanak.’ However, we expect that they will soon come up with some new confirmations. We will surely inform you regarding any further updates on the ‘Sanak’ movie release. Till then, keep reading our previous articles!

Also read: Top 10 Horror Movie Which Can Bring Goosebumps To You