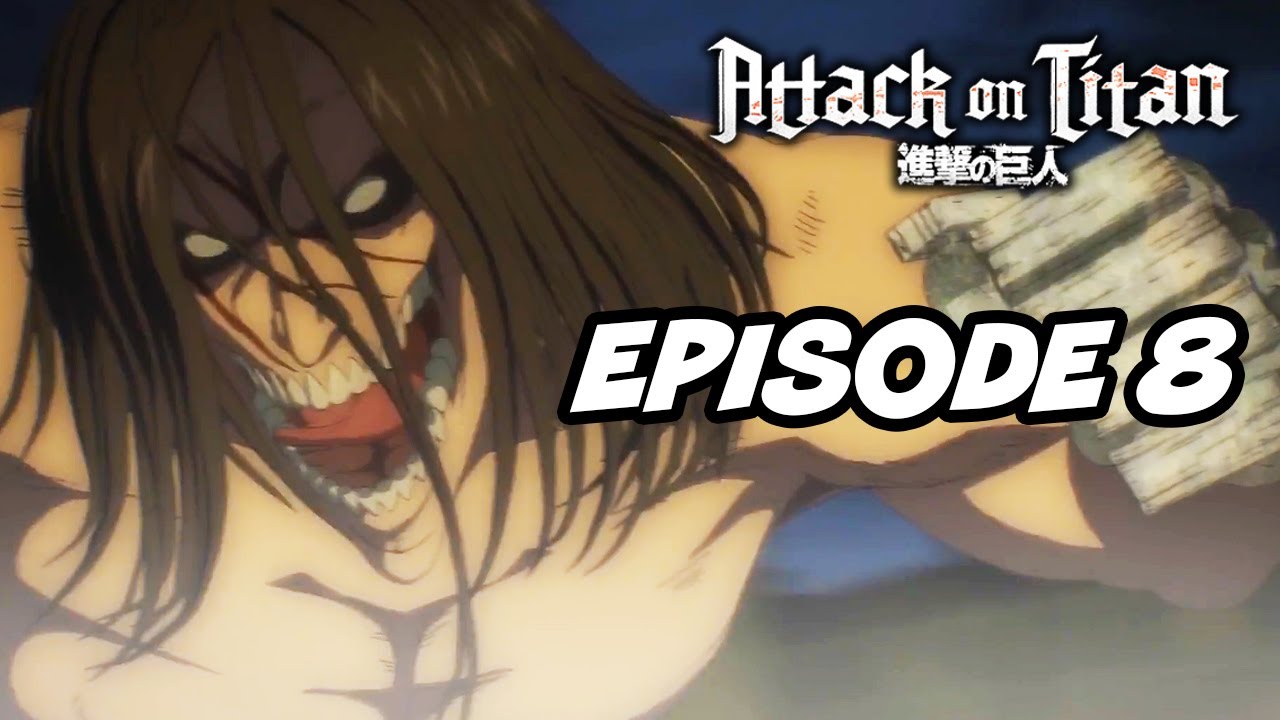 Attack On Titan Episode 8 Review and Preview of Episode 9!

Sasha Passes Away With Armin- Find Out What Happened

On 1st January 2021, the 8th episode of Attack on Titan was aired, and within a day. The episode earned an amazing rating of 8.9 out of ten by IMDb and 8.4 out of ten TV.com. The last episode marked its ending when Reiner rises from his sleep when Gabi and Falco summons him at the very moment when Eren is about to eat Porco. Reiner is awake now, and he is ready to confront Eren. He is surprised by what a monster Eren has become, and he is a threat to his own kind. 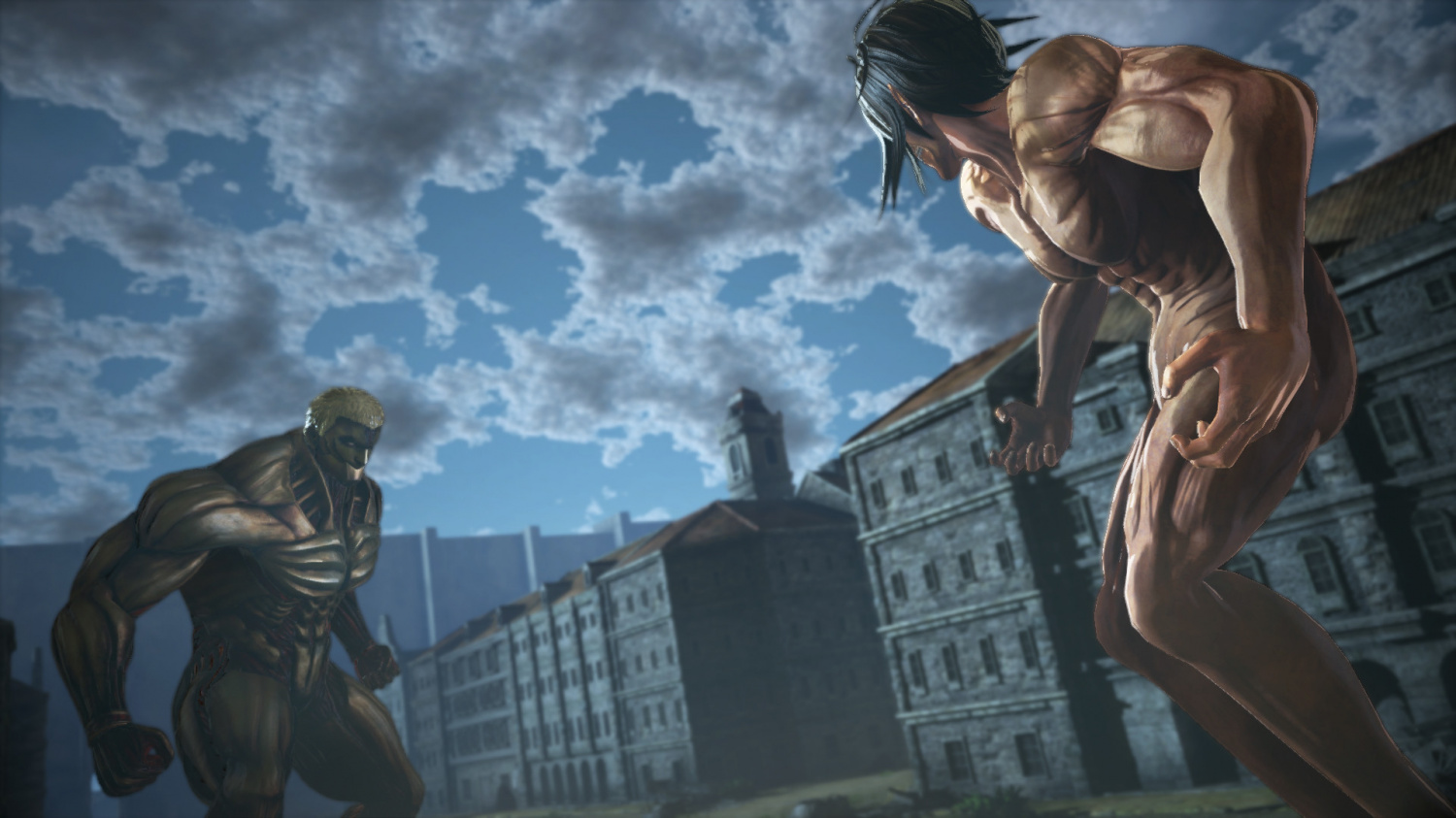 The 8th episode is called the Assassin’s Bullet. The seventh episode’s continuing sequence talks about Eren indulging in a brief battle with Reiner’s armored Titan. Who immediately falls and allows Eren and Mikasa to escape Hange’s zeppelin. Levi captures Eren for going against the Survey Corps and participating in his apostate mission.

Gabi rushes off after them with a rifle but is checked by Falco. Who has begun to recognize the Paradis inhabitants’ need for vengeance after the warrior titans killed many innocent lives during their purpose to secure the Founding Titan. Gabi declines to listen and kills a Survey Corps segment to withdraw his ODM gear heading back to the ship. Falco joins Gabi as she flies upwards. Pieck tells Magath that the woman who ambushed them before the battle is Yelena. Who was aboard the failed naval scout mission to ensure Paradis? Gabi rises aboard the airship and shoots Sasha in the heart.

She and Falco are controlled and brought to Zeke. Who faked his death and helped the Survey Corps with Yelena. Who believes that they can help him create a new Eldian Empire. Sasha dies, and Eren drops to bitter laughter before Jean that Sasha lived if Eren had not included the Survey Corps in his mission.

The 9th episode is the Brave Volunteers and is the continuation of the 8th episode that talks about Armin recalling how Paradis Island confronted the first of many ships sent from Marley and how the island determined to ally with Yelena and Zeke Yeager to fight Marley. The two sides begin to combine their support to fight Marley as they seize the many warships sent to Paradis Island.

He talks to the crystal accommodating Annie about how they buried their lost companions and mentions Sasha’s death, requiring a peaceful option was available instead of always having to fight. Elsewhere, Eren, who is slowly growing numb to the death and destruction around him, resolves to continue fighting Paradis Island’s enemies to the very end. The 9th episode of Attack on Titan is the 106 episode of the manga series Attack on Titan.

The 8th episode of season 4 is based on the 105th chapter of the Attack on Titan Manga. It talks about Eren and Mikasa climb the material onto the Survey Corps’ airship, sharing a disheartened glimpse with Armin, who helps Eren afloat. Insulting Eren’s filthy appearance, Levi kicks him before having him reserved.

Outside, Jean orders the soldiers to secure the ship to board and let everyone know that their enemies have no anti-aircraft weaponry. Former Garrison commandant Lobov tells Jean also to go and stays to preserve the rear. Connie and Sasha help Jean up and acquaint him that the Corps has confirmed six destructiveness. Floch tells them to associate this to Marley’s damage and then leads a rousing cheer for the Survey Corps volunteers, saying the New Eldian Empire has had a significant victory. 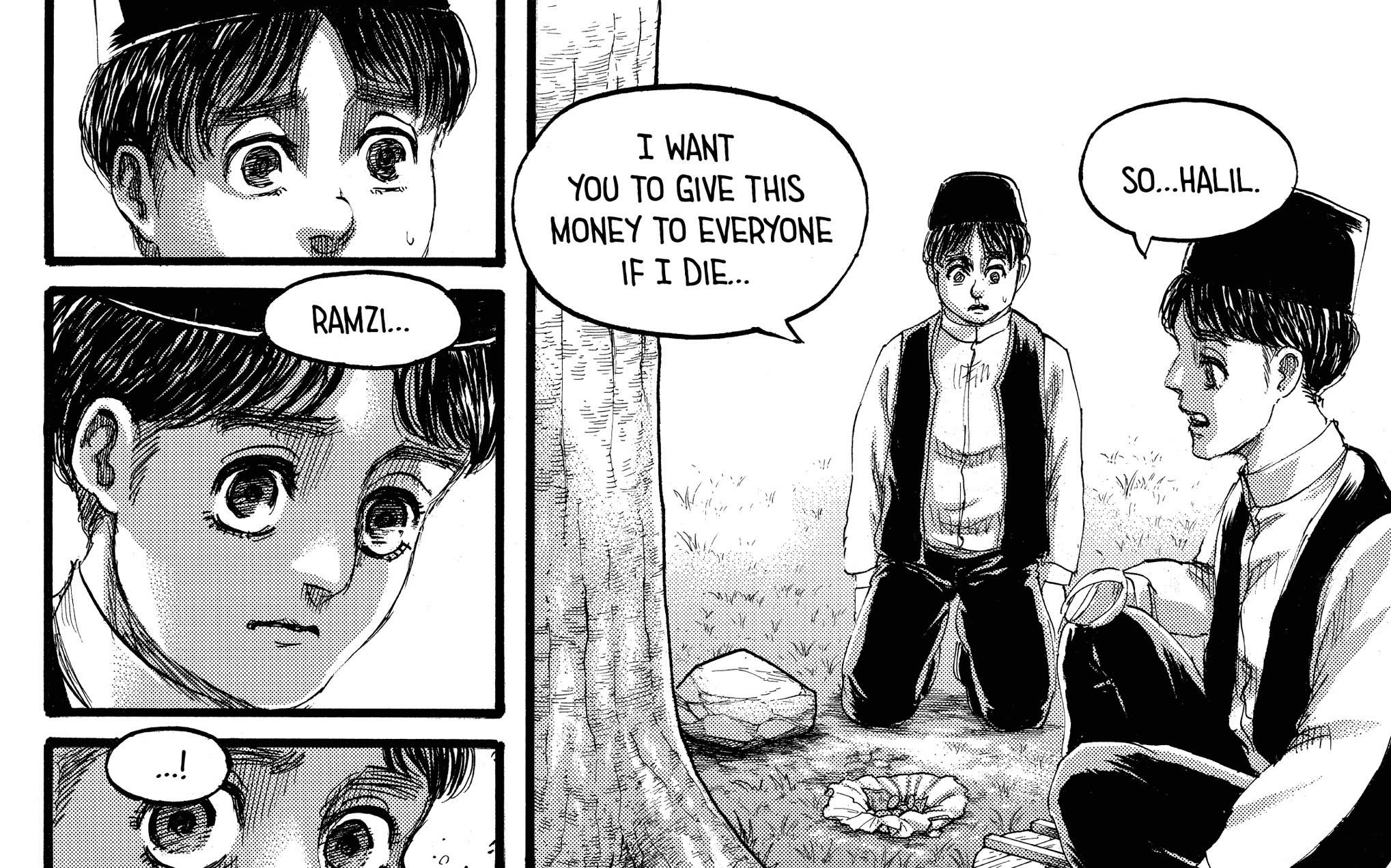 Jean queries how long they will have to continue fighting, but Connie reassures him, saying to Jean and Sasha that they are incomparable to him and appreciative they all remained.

Falco takes up to Gabi and gets her to stop. Gabi rushes after the zeppelin on foot, as Falco follows after her. After getting her to stop, Gabi emotionally evokes the repose of Udo, Zofia, and the two gatekeepers. She explains that people would drool at her just for being an Eldian.

Gabi cannot overlook those who defeated her home and rejects Falco’s notion that the enemy is acting in punishment for a similar invasion of their land by the Marley Warriors. As she describes them, devils, advancing world peace, and Falco remembers Eren’s words to Reiner, they are identical inside and outside the Walls. Gabi returns to following the airship.

As Squad Lima enrolls the airship, Lobov spots Gabi running underneath. Gabi shoots him with her rifle, hitting him with a shot to the head. Lobov’s corpse drops to the area, though the wire from his anti-personnel vertical maneuvering material stays attached to the airship. 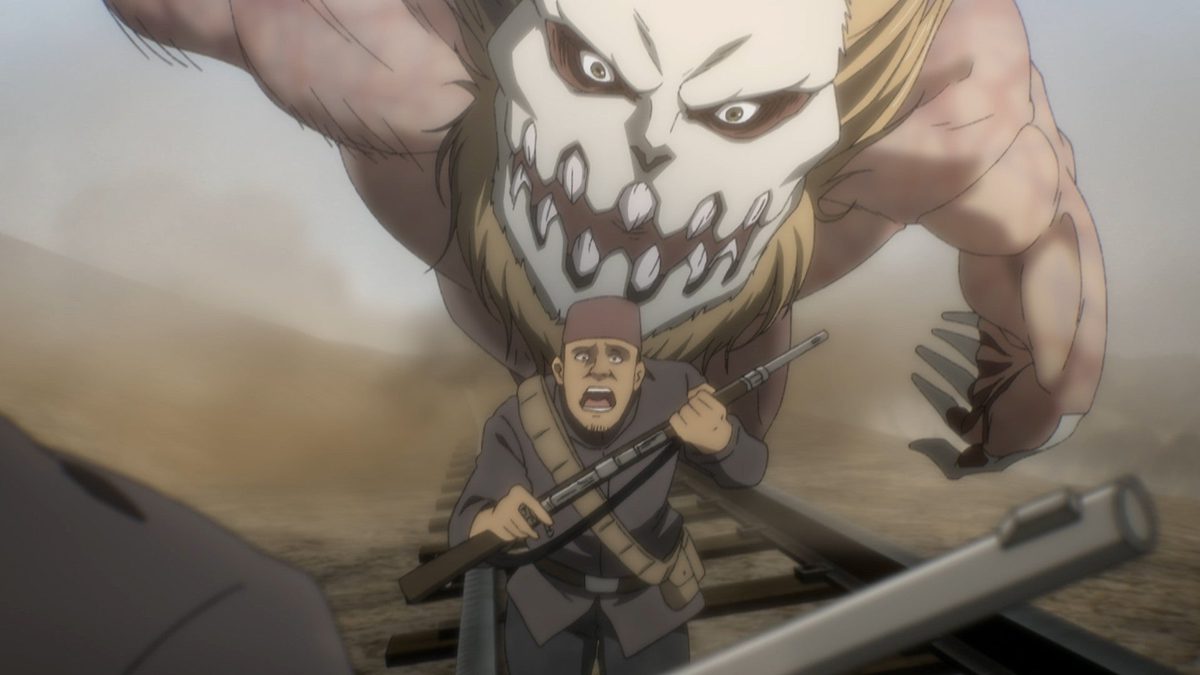 Examining the gear’s trigger, Gabi asks Falco to tell the others of her fearlessness and prepares to leave the airship. Colt appears and races towards the two. Falco remembers Reiner informing him that he would have to save Gabi and seizes her as she animates the maneuvering gear. Gabi shoots at the assembled soldiers.

As the Survey Corps finish celebrating, Gabi operates inside the cabin and quickly fires upon the group of soldiers. The bullet thumps Sasha’s torso, and she hangs limply on her back, to the terror of Jean and Connie. Jean and Gabi aim at one different. However, Falco tackles Gabi to the floor, creating her bullet to go astray and for Jean to miss his mark.

A passionate group of soldiers includes the two children as Jean and Connie rush to Sasha’s side. Flowing out and in shock, Sasha makes an incoherent comment about whether their food is ready, deciding on “meat.” Floch reveals to Jean how the two children made it onto the ship and say he will toss them out. Jean rhetorically asks if it would prevent the assassination.

Meanwhile, Commander Theo Magath is known by Koslow that Gabi and Falco escaped. Magath addresses Pieck, who says that she treasures the officer who had caught her and Galliard. She recognizes the unshaven soldier as a lady on the first missing examination ship to Paradise Island. Pieck cherishes her as a supporter of Zeke Yeager. 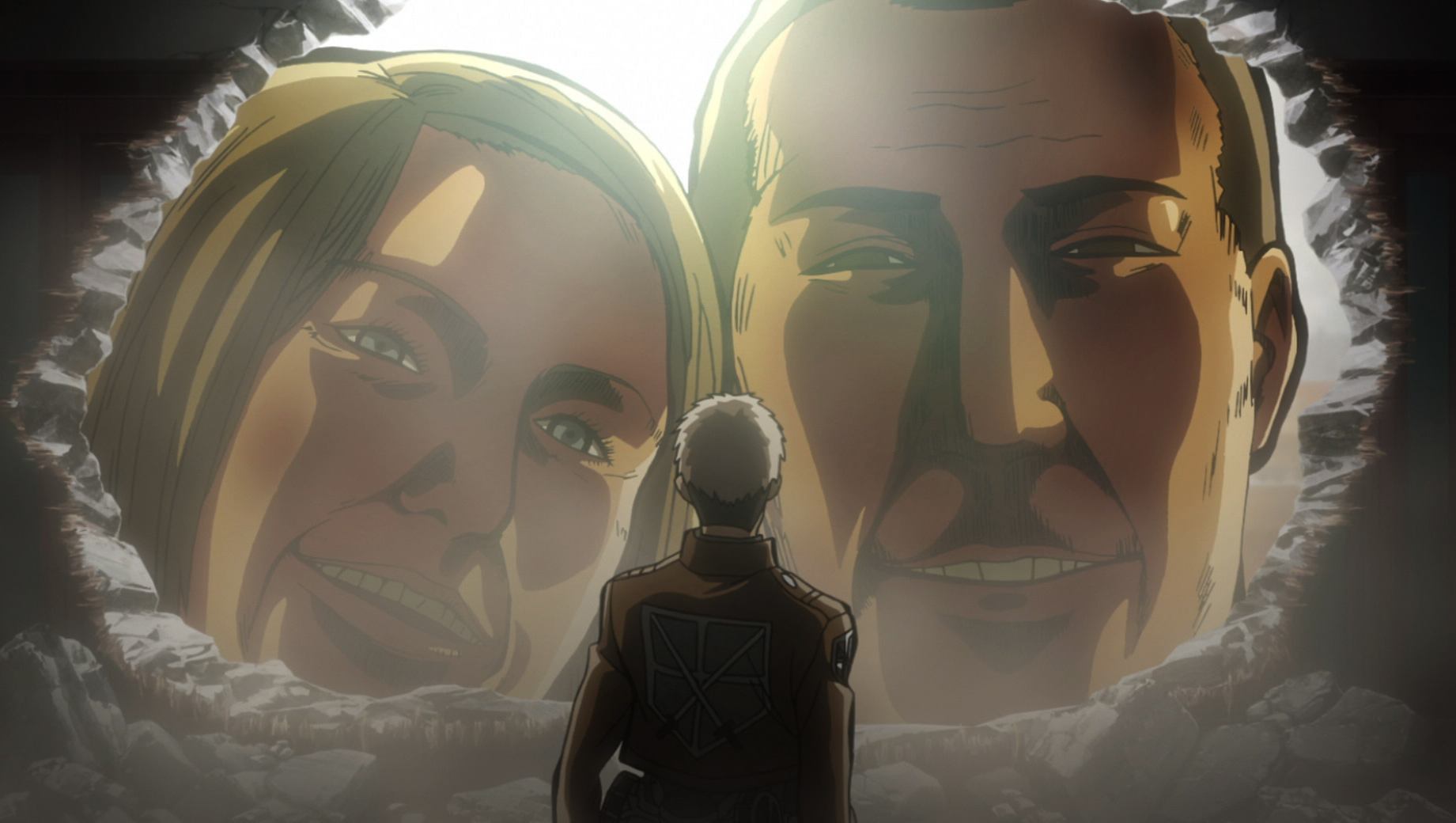 Yelena and Eren see Gabi and Falco produced in. Inside the airship, Levi has Yelena take off her false beard. Gabi yells at the Survey Corps volunteers in the apartment next door, cursing the “devils” while claiming they have not lost yet. The true Eldians would continue Zeke’s will. Steeling himself, Jean brings the two nominees to the room where Zeke sits by Eren, restoring his wings.

Levi reveals that it led to the Beast Titan driving more stones than thought and insincerely overpraises Zeke for dramatic discovery. Zeke jokes back that Levi must have needed to stop him, to which Levi replies with a nebulous threat.

Sasha passes away with Armin and Mikasa alongside her. Eren understands that this battle’s leaders, including killing Marley’s military officers, will have bought them time. However, Hange dissents, finding it more likely that the division will unite in a global invasion against Paradise Island. At the same time, Hange expresses frustration in Eren for abusing his trust in the Survey Corps to push them into action and tricking the Corps’ confidence in the process. Zeke demonstrates that assuming the Founding Titan with a royal-blooded Titan will make all of the reductions meaningful by granting license for Eldia. 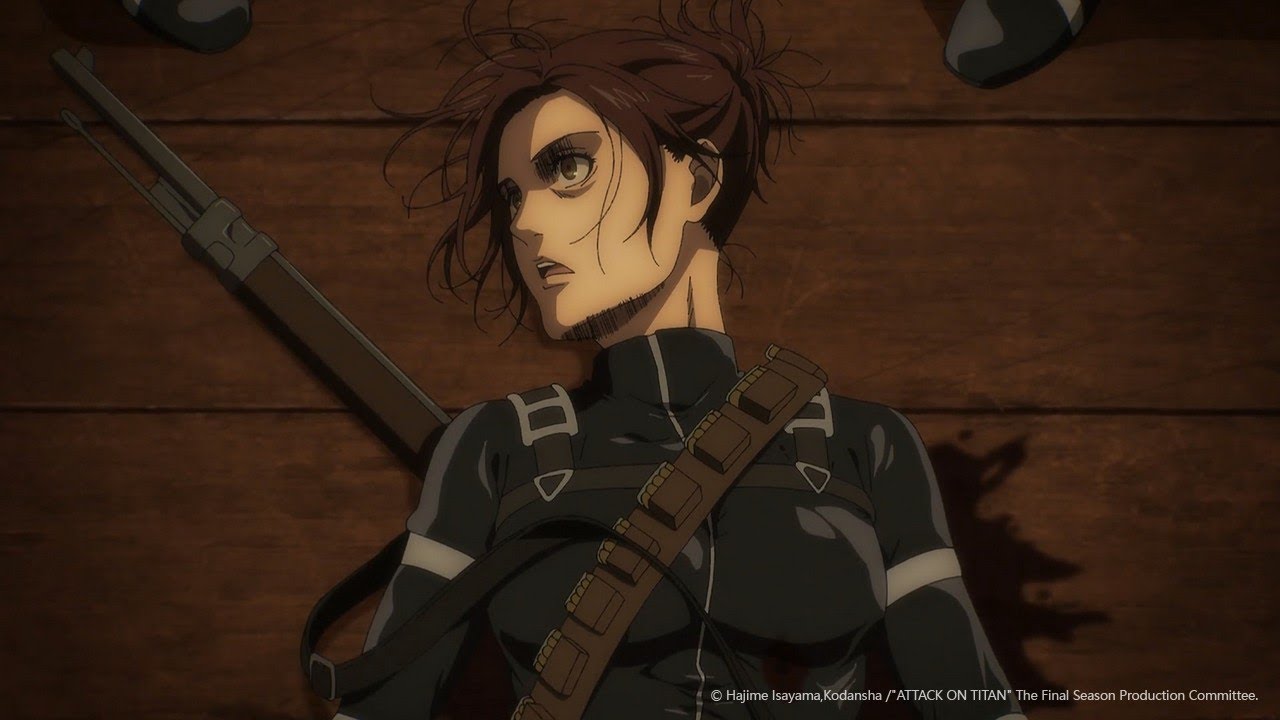 At this time, Connie proceeds through the door to break the news of Sasha’s death. While Mikasa and Armin mourn over her body, Eren asks Connie about Sasha’s closing words. Being told “meat,” Eren lets out an unhinged giggle with a discouraged look on his face.
Jean blames Eren for Sasha’s death, saying she died because Eren had transported the Survey Corps into battle. Eren laughs as he recalls Sasha’s wish to reclaim stolen lands for cattle as those present watch.