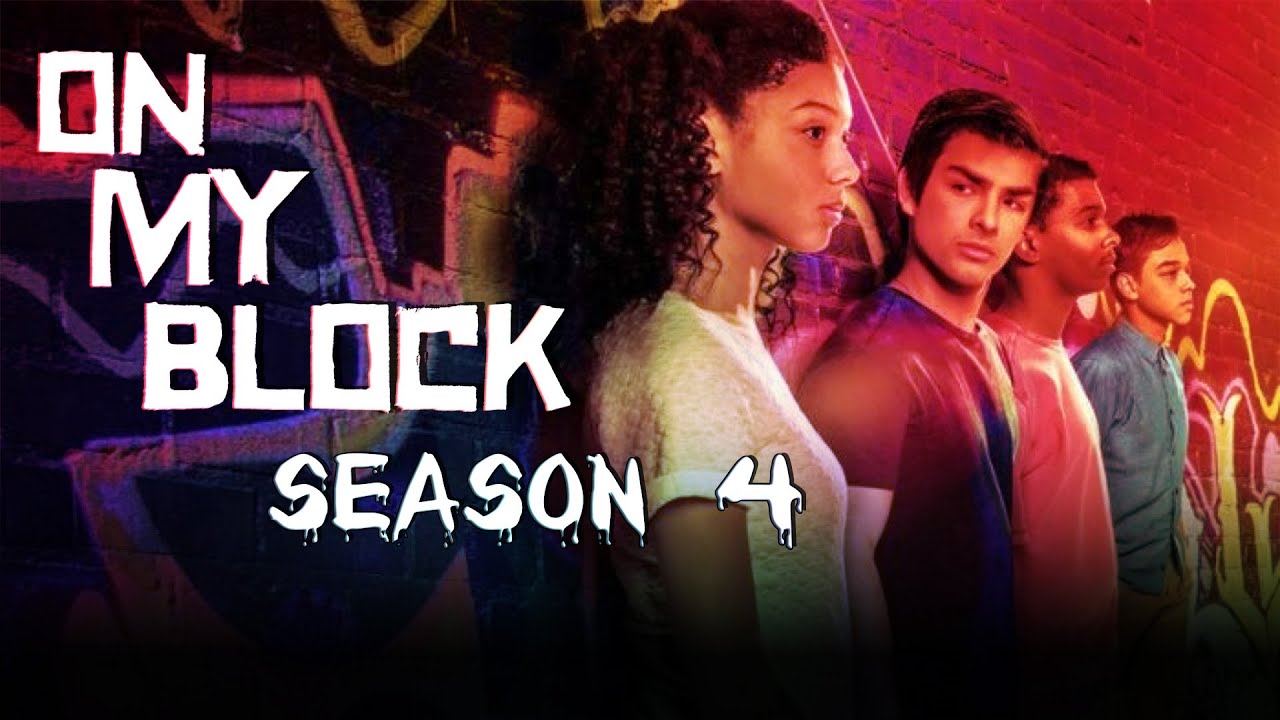 “On my block” season 4 poster

“On My Block” Renewed For The Fourth And The Final Season

Popular American web series, “On my block” is all set to release its fourth and final season. It is an American, slice of life teen drama web series airing on Netflix since 2018.  Not only fans but the critics also love this series. Moreover, its first season has got 95% of rating on rotten tomato. Although, the makers of this series have confirmed on 29th January 2021 that it will get a new season. Nevertheless, season 4 is going to be the final season. However, any official release date is yet to confirm.

Originally the fourth season was supposed to release in the year 2021. However, due to covid pandemic, fans have to wait almost another year for it. The creators of this series are Lauren Lungerich, Eddie Gonzalez, and Jeremy Haft. They are also the executive producer of the series. The music for this series is composed by KOVAS. Moreover, originally the language for release of this series is in English. However, it is available in Spanish as well. Till now, only three seasons of this series has been released.

Each season consists of 10 episodes except the last season which consist of 8 episodes. In total, the numbers of episodes are 28. As for critical appreciation, this series won a teen choice award in 2018 for the best breakout TV show. Moreover, the producers of this series are Jamie Doomer, Robert Sudduth, Hal Olofsson and Arlyn Richardson. The series is produced under the banner of Crazy Cat Lady Productions. The distributor of this series is Netflix. This series is also available in India.

“On my block” season 4 release date

As of now, no official release date has been confirmed by the creators of this series. However, the creators have announced the renewal of the 4th season. As of now, it seems like season 4 is yet to be filmed but is sure to release by 2022. We can surely see all the players returning to the series and we cannot wait for this. Just like the last season, fans are extremely excited for this one as well. They are already waiting for the trailer or teaser to show up sometime soon. Moreover, we are sure it will earn lots of views considering 200 million subscribers on Netflix’s official youtube channel.

As of now, no trailer or teaser of this series is launched. Moreover, not even the date for the launch of the trailer has been announced. Nevertheless, we are sure that it will surface pretty soon. We will surely update you as soon as we come across recent information related to “On my block”.

“On my block” season 3 recap

Hers is what happened in season three of the series.

We see the story picking up its pace where the second season has ended. Finnie, Cesar, Ruby and Jamal are kidnapped and thrown into a white van. Eventually, the identity of the killer is revealed, it is the leader of the street gang, the Santos, called Cuchillos. After everything happened in the first two seasons, the four wanted to their lives to be normal. However, here they are, in the middle of a white van helping Cuchillos find her ex-lover Lil’ Ricky. He is also the owner of Rollerworld money.

Not further stretching the storyline of the season, we will be discussing the very end episode that is episode 8. The 8th episode is titled as the twenty-eighth chapter. Thus, after the fake death of Oscar and Cuchillo, who is dead, Monse attends her private boarding school. Jamal realizes he is in love with Kedara and Ruby develops confusing feelings for Jasmine. However, after this we see them promising each other that this distance will not affect their friendship. Furthermore, we are flash forwarded to 2 years later. Here everything looks different.

Monse is seen chilling with her female friends. Moreover, Jamal joins the football team whereas Ruby has a fashion makeover. As it turns out, Santos team has a new leader and it is Ceaser. Oscar is together with his love interest and a baby on the way. Surprisingly, Kedara is not shown in the flash-forward which left fans wondering about her whereabouts. However, fans are guessing her involvement in season 4.

“On my block” season 4 cast

The cast of “On my block” is a pretty ensemble. However, the four main characters are Sierra Capri, Jason Genao, Brett Gray, and Diego Tinoco. Along with them, we also see Jessica Marie Gracia and Julio Macias playing important characters in the series. As for the side characters, we find, Ronnie Hwak, Jahking Guillory, Emilio Rivera, Peggy Blow, Paula Graces. Moreover, we also find Danny Ramirez, Reggie Austin, Lisa Marcoz, EmeIkwuakor and Shoshana Bush. They are seen playing side but impactful characters in the series that are important for the storyline.

“On my block” season 4 storyline

The series is set on a Los Angeles neighbourhood called Freeridge. It is an inside city in LA. The story depicts four teenagers, Jamal, Monse, Ceaser and Ruby. They are seen to face challenges when they join their high school. Their friendship is said to be lifelong and the series revolves around their friendship. However, their friendship is being tested through various twist and turns. As challenges increase, their bonds become strong day by day.

The viewers are left cliffhanging at the end of the third season, especially with the flash forward. It will be extremely fascinating to see what the series holds for us in the upcoming season. We will surely keep you updated. Till then keep reading our previous articles.