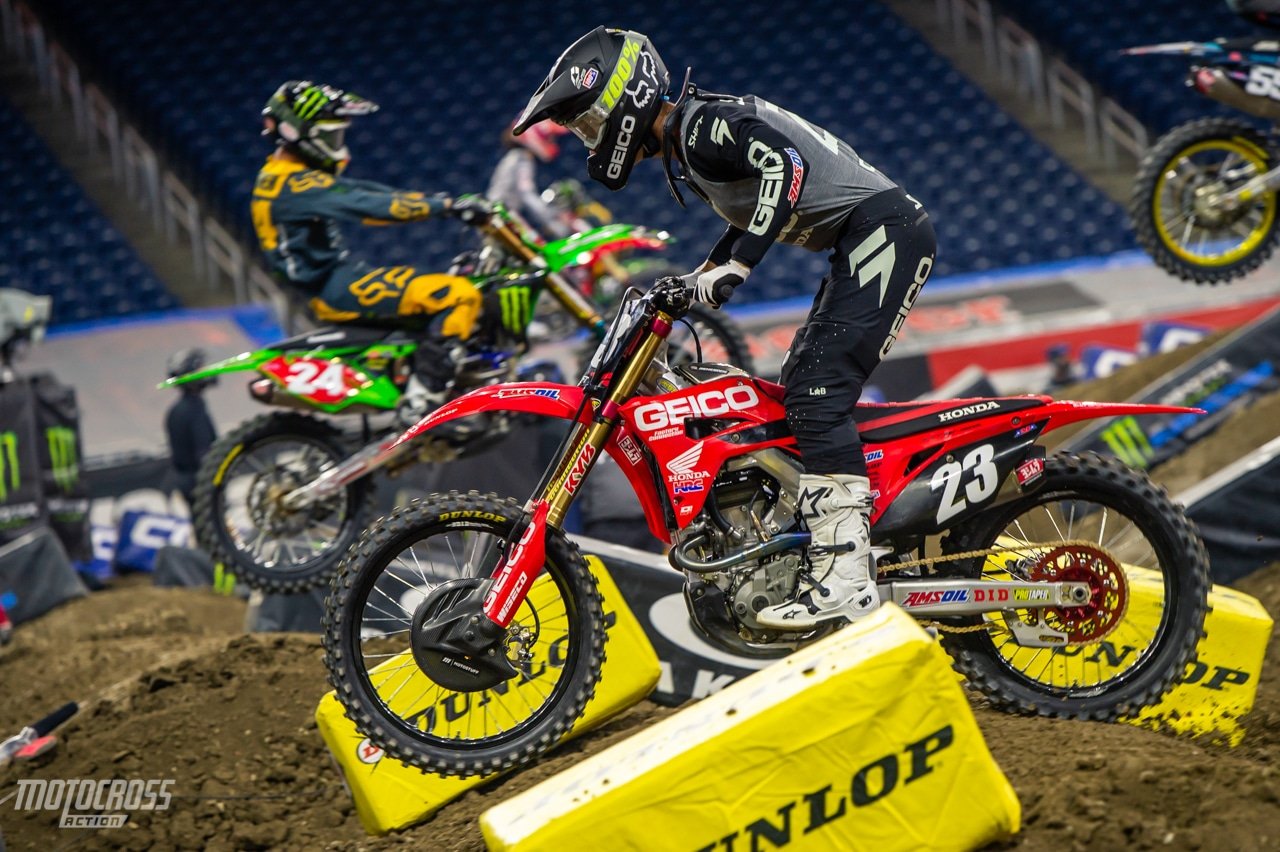 A poster of 'Supercross' championship

Supercross is a dirt bike racing championship that is played indoors. This is a modified and brand new version of Motorcross. Moreover, it is the original form that this sport is played in real. Supercross was first introduced in the year 1974 in the United States. Therefore, in this article, we will be talking about this particular sport in detail. Read here everything that you need to know about it.

In this article, let’s talk about a very exciting, interesting, and challenging indoor sport. Supercross is being played by people for a very long time and has never failed to mesmerize the world. This sport can keep people on their toes with exhilaration and anticipation. The American Motorcyclist Association (AMA) is the one that originally found AMA Supercross Championship in 1974 in the United States.

The races are scheduled to be held from January through early May. Moreover, its former sibling which it descends from is Motorcross. Motorcross is an off-road motorcycle championship where you need to race one another on a constructed dirt track. It is not just a smooth racing track, it consists of obstacles and steep jumps that you need to pass through. Thus, these sports are usually held on dirt tracks that are generally constructed inside a sports stadium.

More about the game ‘Supercross’

Motorcross is taken over by Supercross because it is more accessible to the crowd. This is because they are played inside stadiums. The comfort and accessibility appeal to the crowd more. Hence, it is the one prevailing as of now. This year’s brand new Supercross Championship is all set to release on the 16th of January, 2021. Let us now take a closer look at the same.

Supercross Championship holds different kinds of races. They are similar to short track motor racing. They hold two heat races and one consolation race every event. Moreover, heat races last for five minutes and one lap. In every heat race, 20 racers can participate. But, in some cases, the maximum number can be raised to 21. However, it depends on the number of people qualifying.

After the first heat race is over, nine riders qualify for the next round. Also, another race is known as the Last Chance Qualifier race. However, it is also known as the consolation race. In this race, 22 riders are allowed to participate. This particular race lasts for three minutes and one lap. The four people who get to secure the top four places are allowed to participate in the next round.

The Supercross Championship is all set to release on the 16th of January, 2021. Since it is a sport that people from all age groups can watch, it is even more anticipated than usual. It is a kind of sport that can keep people on their toes. The viewers have been waiting for a long time for ‘Supercross’ to release. However, Supercross has never disappointed its audience. Thus, hopefully, this year, they won’t disappoint either.

History of the game ‘Supercross’

Motorcross, which is the predecessor of Supercross, was first held on the 28th of August, 1948. It is heldon a racetrack inside a stadium in the Paris suburb of Montrouge. However, Motorcross quickly became very popular in the United States of America in the late 1960s. As a result, Bill France decided to add a professional motorcross race to the 1971 Daytona Beach Bike Week championship. The first-ever constructed track between the main grandstand and pit lane on the grass surface was first held in 1972. First people to win were Jimmy Weinert who won the 250 class and Mark Blackwell who won the 500 class.

The Los Angeles Memorial Coliseum race was first held in 1972. It was a constructed stadium-based Motorcross event and this is the event that paved the way for stadium-based events. Moreover, this event was majorly promoted by Mike Goodwin and Terry Tiernan. He happened to be the president of AMA then. It was named the “Super Bowl of Motorcross” and thus, the term led to the current name “Supercross”. This Super Bowl of Motorcross was again held the next year and it thankfully turned into even greater success. This, with time, turned into the AMA Supercross Championship. Moreover, this is held in stadiums across Canada and the United States.

The schedule for the Super Championship is given below. Moreover, all the races will be broadcasted on NBCSN.

To know more about the sport, do not forget to check it out as soon as it releases. Till then keep reading our previous articles.

Also read: ‘Stolen By My Mother: The Kamiyah Mobley Story’ – Movie On The Real Life Story Of Gloria Williams