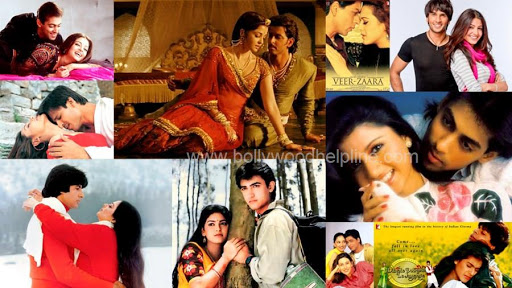 Romantic movies are an all-time favorite. the audience can never get bored of it. Indeed, romance and comedy do well together. But it’s not necessary to have them together always. Bollywood has made some epic love stories of all times. These films also create a belief among the people that true love still exists. The best Bollywood romantic movies of all time are available to stream on Netflix, Amazon Prime, and other platforms. Moreover, the most common category of movies streamed these days are romantic ones.

Here’s a list of some Bollywood romantic movies that are among the most streamed movies.

Yeh Jawaani Hai Deewani is an Indian romantic comedy-drama. It is directed by Ayan Mukerji and written by Mukerji and Hussain Dalal. The film was produced by Karan Johar. The film stars Ranbir Kapoor and Deepika Padukone. Kalki Koechlin and Aditya Roy Kapur are in the supporting roles. Madhuri Dixit made a special appearance in an item number beside Ranbir Kapoor. The film was released on 31 May 2013. Moreover, it was very popular amongst the youth.

The film starts with Naina Talwar (Padukone), who is a medical student who studies constantly and tops her classes. She feels like an outcast because of her introverted nature. Aditi Mehra (Koechlin) is her old classmate who made her realize that she wants more from life. Later she decides to follow Aditi on a hiking trip without informing her parents. During this hike, she also reunites her friendship with other classmates, were Kabir Thapar (Kapoor) and Avinash Arora (Kapur). Bunny has a dream is to wander and discover the world and has no interest in ever settling down at one place. You can stream it on Netflix right now.

It was among the top three movies to cross ₹3 billion worldwide after 3 Idiots & Ek Tha Tiger.

Jaane Tu… Ya Jaane Na is a 2008 romantic comedy film that is written and directed by Abbas Tyrewala. It stars Imran Khan and Genelia D’Souza. They are in the lead roles. The film is produced by Mansoor Khan and Aamir Khan. This film marked the debut of Abbas Tyrewala in the field of direction and also the re-appearance of D’Souza in Hindi cinema. The music was composed by A. R. Rahman. The film was released on 4 July 2008. Watch it on Netflix here.

Ae Dil Hai Mushkil is a 2016 Indian musical romantic drama film. It was directed, produced, and also written by Karan Johar. The music was composed by Pritam. The film stars Ranbir Kapoor, Anushka Sharma, Aishwarya Rai Bachchan, and Fawad Khan. Shah Rukh Khan, Lisa Haydon, Imran Ali Abbas made special appearances. It was released on 28 October 2016. The film starts with the interview of Ayan Sanger (Kapoor), who is a singer. He has newly acquired fame with his non-filmy songs.

He narrates his experience of love in a flashback. In London, they had a chance of meeting in a disco. Ayan is the son of a billionaire who is also a novice in terms of sex-related matters. On the other hand, Alizeh Khan knows about relationships a little more. They end up trying to have fun for a night but,  it turned into a comedy. Later, They got to know each other and became friends. You can watch it on Voot.

Love Aaj Kal is a 2009 Indian romantic comedy film. The film includes Saif Ali Khan and Deepika Padukone with Rishi Kapoor and Giselli Monteiro in supporting roles. Neetu Singh also appears in cameo appearances. The film was directed by Imtiaz Ali and was produced by Saif Ali Khan and Dinesh Vijan. The film showed the feeling of pure love that can never change even with changing times and generations.

The story is about Jai Vardhan Singh and Meera Pandit who are a modern-day couple. They are living in London. They are happy with each other, but they do not believe in marriage. Also, they had a mutual break-up but remained friends when it comes to their careers. Meera goes to India, while Jai stays in London itself hoping to be called to San Francisco. During this time the couple believed that they have moved on. But did they? Find out on Voot.

Rockstar is a musical romantic film that is both written and directed by Imtiaz Ali. The film is produced by former Eros International. The film stars Ranbir Kapoor opposite Nargis Fakhri. The music is composed by A. R. Rahman. Shammi Kapoor also makes his silver-screen appearance in this film which also marked his last. The storyline follows Jordan, who dreams of being a rock star like his role model, Jim Morrison.

The story starts with Jordan (Kapoor) studying at the University of Delhi and dreams of being a rockstar. Khatana who was the canteen owner, tells JJ that one thing that is common among all artists, that is heartbreak. Over time, he becomes good friends with Heer (Fakhri) and the duo starts spending time together. Even after attaining all that he dreamt of, Jordan ends up tormented and unhappy because of the loss of Heer. He loved her passionately and her death is accidentally caused by Jordan himself.

Salaam Namaste is a romantic comedy film. It is directed by Siddharth Anand. It is produced by Aditya Chopra and Yash Chopra under the Yash Raj Films banner. The film includes  Saif Ali Khan and Preity Zinta in the lead role. Arshad Warsi, Tania Zaetta, and Jugal Hansraj also appear in supporting roles.  The story is about two young Indians named Nick (Khan) and Ambar (Zinta). They left their homes to make a life on their own in a new town Melbourne, Australia.

The story shows their lives together, dealing with their problems and relationships. They first met at a wedding ceremony. Later they decided to move in together without marriage. They broke up after discovering that Ambar is pregnant because Nick didn’t want a child at that time. Find out what happened next only on Prime Video.

Kal Ho Naa Ho is a romantic comedy film that is directed by Nikkhil Advani. The film includes stars like Jaya Bachchan, Shah Rukh Khan, Saif Ali Khan, and Preity Zinta, with other actors in the supporting roles.

It is a story about Naina Catherine Kapur (Zinta), is an MBA student who is living in New York City. She started to fall in love with her neighbor Aman Mathur (Khan). Aman is a terminally ill patient and he tries to set Naina up with her best friend Rohit Patel (Saif Ali Khan). The film was written by Karan Johar. Watch it here.

Barfi is a comedy film that is written and directed by Anurag Basu. It is produced by Ronnie Screwvala under UTV Motion Pictures.  The film depicts the story of Murphy “Barfi” Johnson and his relationships with two women, named Shruti and Jhilmil. The film includes stars like Ranbir Kapoor, Priyanka Chopra, and Ileana D’Cruz who are in the lead roles, with other actors in supporting roles.

Murphy “Barfi” Johnson (Kapoor) is a charming young man who was born deaf and mute to a Nepali couple living in Darjeeling. He lost his mother at a very young age. His father raised him alone. Later he gets with two girls, Shruti and Jhilmil. Watch the complete movie to find out more about Barfi.

Devdas is a 2002 romantic film that is directed by Sanjay Leela Bhansali. The film is based on the 1917 Sarat Chandra Chattopadhyay novel which has the same name. The film shows scenes of the early 1900s. The story follows Shah Rukh Khan as Devdas and a wealthy law graduate. He returned from London to marry his childhood sweetheart, Paro. The role of Paro is played by Aishwarya Rai. However, their marriage was rejected by their family, which turned him into an alcoholic.

Jab We Met is a romantic comedy film that is written and directed by Imtiaz Ali. The film is produced by Dhillin Mehta. The film cast includes Kareena Kapoor and Shahid Kapoor. There are many other supporting actors.

It tells the story of a carefree Punjabi girl, Geet Dhillon (Kareena). She is sent off track when she meets a depressed Mumbai businessman, Aditya Kashyap (Shahid), on a train to Delhi. Later when they both became friends, Geet forces him to come with her to her hometown. She later tells him about her boyfriend. But things eventually changed and they both fell in love with each other.