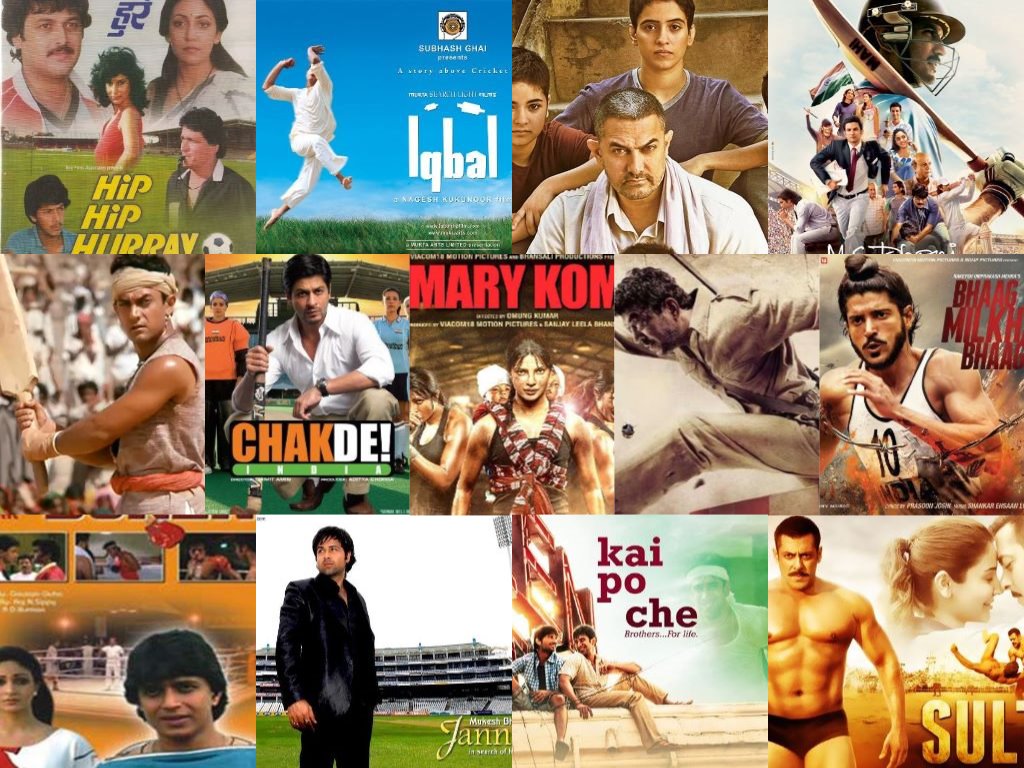 Top 10 Must Watch Sports Films of Bollywood – Most Recommended

Bollywood movies have touched all sorts of themes and genres. It also touched sports in many of its films. The story of these sports films is amazing and epic. The story is about someone’s life who is not remembered. The film shows the life history of those athletes whose stories are not revealed to the audience. They need to know about such great personalities.

It holds the nation together as one. It brings emotions to sports. It has become a way to inspire and motivate the youth of a country. It also increases the love for sports. The athletes should be given respect as they respect our country on an international level. These movies help in transforming ourselves and also creates a spirit of doing something for the nation.

Here’s a list of some sports-related Bollywood movies which you should watch at least once.

It is a sports film that is directed by Shimit Amin. Aditya Chopra is the producer of the film.

It tells a story about the Indian women’s national hockey team who were selected from various parts of India. It shows the story of Kabir Khan, the former captain of the Indian men’s national field-hockey team. He and his mother were driven out of the home by their angry neighbors after losing a game with Pakistan. Khan becomes the coach of the women’s hockey team and unites them. He became the coach with the aim to turn its sixteen players into a brand new championship unit. Later they went to the finals and played opposite to the Australian team which was the champions for the last four years.

Chain Kulii Ki Main Kulii is a sports comedy film that is directed by Karanjeet Saluja. The film includes stars like Zain Khan and Rahul Bose as the leading actors. Kapil Dev made a special appearance in the film.

The story is about Karan who lives in an orphanage owned by a warden, John “Hitler”. He dreams of becoming a cricketer like Kapil Dev and luckily he got his bat from somewhere. He started thinking that the bat was lucky to him. The Indian coach saw him playing one day and selected him. He was the opening batsman along with Varun, the captain. After the match, Karan decides to stop playing and to start studying. He decided to re-join the team when he is older. In the ending Varun and his girlfriend, Malini adopted Karan.

Apne is a sports film that is directed by Anil Sharma. Dharmendra plays the role of an ex-boxer Baldev Chaudhary. He tries to wash that insult in his boxing career through his sons Angad and Karan. Angad refuses to play and then Laran tries to remove that stain from her father’s career. Later during the final fight, he gets injured and was paralyzed to bed. Angad trains himself and fights for his father as well as his brother.

Patiala House is a sports drama film that is directed by Nikkhil Advani. The film includes stars like Rishi Kapoor, Akshay Kumar, and Anushka Sharma. It was produced under the banner of People Tree Films.

The story is about Kaali who is good at cricket and wanted to play for England. His siblings hated him. He was alone without any friends. He gets another chance to fulfill his dream, also helps his siblings to achieve their dreams. Later his father gets to know who is Kaali and he supports him.

Bhaag Milkha Bhaag is a sports drama film that is directed by Rakeysh Omprakash Mehra. The film includes Farhan Akhtar and Sonam Kapoor.

The film is basically based on the life of Milkha Singh. He is an Indian athlete and also a Commonwealth Champion. He was also an Asian champion and an Olympian. The film starts during the partition the time when he lost his parents during the riots.

It is available on Disney plus Hotstar.

Mary Kom is a sports film that is directed by Omung Kumar. It is produced by  Sanjay Leela Bhansali. The film includes stars like Priyanka Chopra, Darshan Kumar.

Kom challenges a local wrestler for money, to get a household cow back, which her family had to sell off because of their financial problems.  She meets Onler and they were later married. Kom gives birth to twins. Onler encourages her to restart her boxing training and she later joins the training. Kom convinces Narjit Singh to train her. She regains her strength and wins the championship.

This is available on Netflix.

It is a sports film that is directed by Ali Abbas Zafar. The film is produced by the Yash Raj Films banner. The film includes stars Salman Khan opposite Anushka Sharma.

The film shows Sultan Ali Khan is a Jat wrestler living in a small town in Haryana. Aakash Oberoi is the founder of a mixed martial arts league. He is encouraged by his father to take Sultan for the league’s popularity. Aakash approaches Govind who tells him how Sultan’s career began.

Sultan fell in love with Aarfa Hussain, who is a state-level wrestler. Later, they were married and become wrestlers, who represented India. After coming from the tournament he finds that his newborn son died. The baby had a rare O- blood type,  which was the same as Sultan’s. Aarfa decides to leave Sultan. After losing both his wife and child, he begins raising funds to open a blood bank in his son’s name. Aakash tells Sultan that the prize money can fulfill his dream. Sultan agrees to participate. Later, Sultan wins the fight but was injured and was hospitalized. Due to this, he was reunited with his wife, and later they were blessed with a baby girl.

This is available on Amazon Prime Videos.

It is a biographical sports film. It is both written and directed by Neeraj Pandey.

The film includes stars like Sushant Singh Rajput,  along with Disha Patani, Kiara Advani, and Anupam Kher. The film shows the life of Dhoni, the former captain from childhood. The film starts at the hospital maternity unit, Pan Singh is confused. From his school days, he was interested in cricket and initially football.

He meets Priyanka Jha. They were attracted to each other. Unfortunately, Priyanka met with an accident and lost her life.  Later he meets Sakshi who reminds him of Priyanka. They both started spending time together and later got married.

This is available on Disney plus Hotstar.

Soorma is a biographical film that is based on the life of hockey player Sandeep Singh. The film is directed by Shaad Ali and was produced by Sony Pictures Networks India. The film includes stars like Diljit Dosanjh, Angad Bedi, and also Taapsee Pannu in the leading roles.

The movie starts at Shahbad Hockey Centre, Sandeep Singh, and his older brother, Bikram Singh are seen undergoing punishment. Kartar Singh is a strict trainer and he was also the coach for their team. He meets Harpreet Kaur, who practices hockey at the same center. They both fell in love with each other. The coach gets to know about them and physically assaults Sandeep.

He became good in his game and also got a job offer. He was accidentally shot in his back and was paralyzed in the lower while leaving for Hockey World Cup. In 2007,  with the support given by the Indian Hockey Federation, he moved to the Netherlands, for his intensive therapy. He recovered from his injury and played again for the Indian team. He also played in the commonwealth games 2009.

Gold: The Dream That United Our Nation is a film related to sports. It is both written and directed by Reema Kagti. The film is produced by Farhan Akhtar. The film stars Akshay Kumar and Mouni Roy. This was her first Bollywood movie.

The story centers around 1936 when the Indian team played the Hockey finals against Germany. Despite the rough game played by the Germans against the Indian team, the Indians won in the second half. The other subsequent Olympics were canceled due to World War II. He has the aim of making India play hockey as a free country. Tapan starts struggling to win his position as a joint manager of the team.

In this process, he meets the former Hockey Captain Samrat, to guide the team. But Samrat suggests his teammate Imtiaz Ali Shah. Tapan meets Imtiaz and shares his dream. He decides to work with him.

Finally, Tapan creates the National Hockey team, by taking players from several regions of India mainly from Punjab. India gets Independence but partition took place between India and Pakistan. There were riots going on during which Imtiaz got injured. After this incident, he left India and went to Pakistan.

This is also available on Amazon Prime Videos.