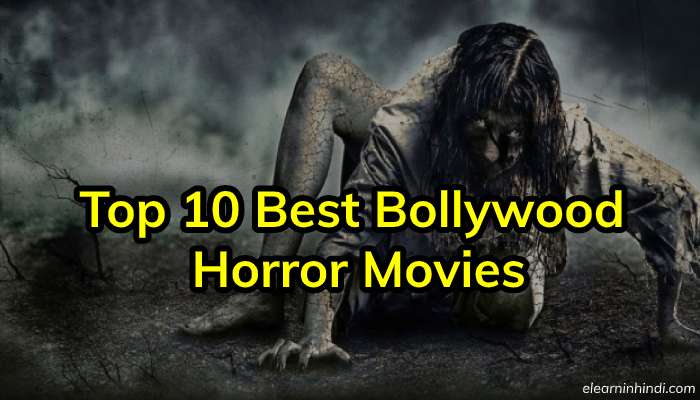 Bollywood filmmakers have made films in all categories. The generation has rediscovered the horror genre. These movies have typically funny costumes and creepy looking characters. These films create suspense and terror among the audience. There is an uncountable collection of horror movies. These movies bring goosebumps to the audience. Horror movies make the audience feel scary. They are either based on supernatural spirits or any incident that happened in the past.

Here’s a list of some of the Best Horror Movies for you to binge-watch:

The story of the film is about Shankar. He moves into a palace that is old and abandoned. He is welcomed there by the gardener. He tells Shankar about the palace. The palace was used to be a home for a couple, forty years back. The couple died because of their intense love. Shankar is amazed to see the photo of the old owner. The picture looks exactly like him as if he was the owner. At night time Shankar hears a woman singing. He tried to follow her and the moment he approaches close to her, she disappears. He tells this incident to his friend and he warns Shankar to stay away.

The ghost appears again. This time she warns his friend to not interfere in between them. Shankar gets drawn towards the ghost gradually. The events taking place in the palace becomes questionable after his marriage.

The story is about Rajeshwari who meets a rich man named Amit Kumar Singh. They both fell for each otherand later got married. Amit brings Rajeshwari after their marriage to his home that is a huge mansion in the middle of Moors. Rajeshwari gets to learn from servants about Amit’s first wife Poonam. She died a year ago under mysterious circumstances. The servant also tells her about Dai Maa who was disturbed by this incident. She was also the nanny of Poonam and this was the reason she is cold towards Rajeshwari.

Amit leaves on a business trip leaving Rajeshwari alone. She encounters some supernatural phenomena in the mansion during this time. She thinks that the mansion is haunted by the spirit of Poonam. Rajeshwari decides to do an investigation of Poonam’s death. Later she uncovers shocking secrets about Poonam, Amit, and other people.

Sanjana Dhanraj started to feel neglected by Aditya, who is her husband and also a businessman. She used to take sleeping pills. One day she took too many pills and met a car crash. The two of them decided to go away and spent some quality time together. She suggests that they should go to their house in Ooty. She believes that she can hear the screams of a girl but others can’t.

Aditya thinks that she might be going mad after the crash. She along with her friend Priya consulted an expert. Later came to know that a spirit is haunting the house. Sanjana also comes to realize that Aditya is hiding something from her.

The story is about Vishal who is a stock analyst. He is married to Swati. The two are searching for a flat in Mumbai. Vishal lastly finds the perfect place on the 12th floor of an apartment building. The apartment has a past. Previously a young woman who used to live there. She killed her child and she herself jumped from the balcony. Swati learns about this incident after moving there. After which a number of incidents drove Swati to madness.

Vishal convinces his wife that she has some sort of psychological disorder. He consults a psychiatrist, on the other hand, the maid believes that Swati was possessed, and she calls an exorcist (Rekha). The watchman was also terrorized. Inspector Liaqat Quereshi came to investigate the murder at the building.

This film is available on Voot.

Darna Mana Hai is a film with six different stories. Seven friends got stuck in the middle of a forest as their car broke down. They started to tell each other horror stories that they have heard before.

The story revolves around a married couple, Karan and Anjali. Karan gets out to check the problem. He disappears and his constant cries for help were heard. Anjali runs into the forest to rescue him. She finds the torch which Karan took covered in blood. She becomes sacred to discover a hand is wearing a watch like Karan’s. Later she finds him completely normal. Karan tells her that he also heard her screams from the forest. After fixing the car problem they climbed into the car and drive off. Karan puts his arm around her as she was anxious and she leans on him. He looks into the rearview mirror and he discovers that his reflection is not visible.

The story is about a photographer, Anil. He checks into an inn on his way to Mumbai. The manager and owner were strange. They insisted that smoking is strongly prohibited. When Anil tries to smoke outside, the man restricts him there too. The owner takes Anil to a basement and shows him dead bodies, These were the bodies of those people he tried to prevent from smoking. When a customer walks in smoking, Anil tells him that smoking is prohibited. Later, Anil tries to shoot him with a gun.

The story is of a school teacher Dayashankar Pandey. He punished Pramila for not completing her homework. One day, he asked Pramila to hold out her hand for punishment, but she shows her homework instead. He then asks about the Om sign that Pramila used to draw on every page of her homework. Later, he decides to go to Pramila’s house and explains that he once murdered his intelligent friend, Varun, out of jealousy.

The story focuses on Gayatri. She meets a vendor who was selling apples for Rs. 20 as compared to everyone else. When she gets home, Sanjay eats one of the apples and finds it tasty. The next morning, when she wakes up, she finds an apple next to her. She runs outside and is shocked to see every person who ate an apple turned. The vendor appears with an evil look.

John Rodrigues is seen standing at a graveyard. Amar asks John why he was at the graveyard because he thinks that his wife is dead. John says that he is dead. Amar takes it as a joke. Amar takes off his sunglasses, which revealed that his eyes are hollow. John dies of shock after seeing Amar.

The final story is about Purab, and his love interest, Abhilasha. Purab tries to commit suicide because Abhilasha rejects his proposal. Purab uses his power on his father. In his room, he is making plans to use his power

This is available on Amazon Prime.

This is the story of Arjun who marries Lisa despite all the humiliation because she was of the other faith. Arjun disowns his family and faith when he discovers that they tried to burn Lisa alive. Arjun was an architect. He and Lisa went to Palampur to take charge of a mansion. He will raise that mansion into a hotel. The architect assigned before him tried to take charge but he died. Arjun takes charge of the mansion. Before taking the charge he was unaware of supernatural things.

Lisa can experience some strange things in the house. During his absence, Lisa takes the help of a local priest. Father Thomas tells her about the presence of some strong supernatural power in the house. Later, that spirit took control over Lisa. Arjun saves her in the end.

This film is available on Disney Hoststar.

The film starts with Aman who narrates how he and his sweetheart Kaya are doomed to fall together. He remembers all the happier times when he met and finally proposed to Kaya. Kaya’s mother reveals the curse that is upon their family. Aman and Kaya are destroyed. They reach out to professor Pashupati who explains that curses are connected with an evil spirit. Kaya’s conditions worsen and she wheeled into surgery. The film ends with Aman narrating the power of love.

This film is available on Disney Hoststar.

The movie begins with the scene when Uday was entering the house of Ragini. Uday and Ragini decide to travel to their friend’s farmhouse. They went on the trip to spend some time together. Ragini discovers that the entire bungalow is covered with cameras, and Uday is recording all their movements on his camcorder. Afterward, they both settle down to have some fun but were again interrupted by two friends, Priya and Vishal. They are on their way to Matheran.

The four of them started chilling together. Vishal gets upset to know Uday was unhappy with their presence. They both decided to depart. The two were interrupted again by a wicked Marathi-speaking body. They were scared to see that happening.

It is a story about seven friends who reunites to bid farewell. They choose a hotel that was in a haunted location. This place was an Asylum earlier and it got destroyed due to fire and was later renovated into a hotel. The owner of the hotel also committed suicide. Rumors about his death stated the ghost might have pushed him to commit suicide. But these friends knowing these stories still entered the hotel. After that night their lives were changed forever.

This film is available on Netflix.

Bobo is a talented illusionist. His past kept haunting him. He used to get visuals about something dangerous. These visuals distracted him during his stage shows. He goes to see a psychiatrist and asked for help. He is able to recall his suppressed memories of his childhood with the help of a psychiatrist. Bobo suspected his sister to be a Daayan during his childhood. She used to practice witchcraft and also worshipped the devil.