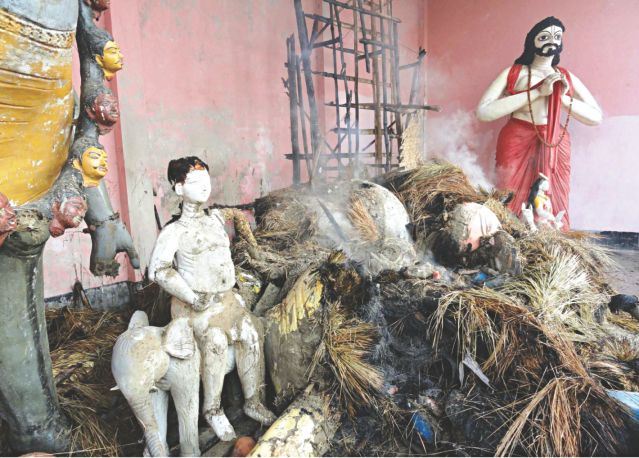 Bangladesh: Hindu households consisting of residents, were vandalized Comilla. The video, which has now gone viral on social media, shows a violent Muslim mob, with skull caps and brandishing sticks, logs, and stones that were vandalizing the houses. 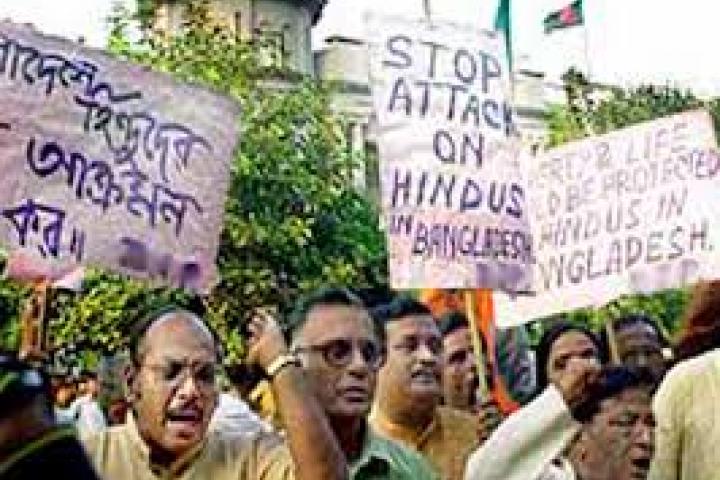 This incident is being seen as a hate crime done against the Hindu community as the houses targeted to consist of Hindu residents, and the mob was a group of Islamists. The carnage lasted 5 hours, and no arrests were made. The issue was sparked after a man reportedly showed support for France. The police jailed two people over the comments on Facebook on Sunday for allegedly ‘hurting religious sentiments.’

The office of the local Union Parishad Chairman Bankumar Shiv, and the house of the accused alleged Facebook commenter Shankar Debnath, were vandalized and set on fire. The fire service had to be called to douse the fire. The Bangra police and other high ranking officials visited the scene of the crime and several vandalized households. The additional force was deployed in that area to maintain law and order.

Some reports also mention over 10 Hindu temples were vandalized as well. After the brutality, which supposedly went on for quite a long time, two Hindu Sanctuaries in nearby Madhabpur in Habigunj likewise went under assault, the report said citing police and onlookers. This wasn’t the first time when such an attack took place on Hindu houses in Bangladesh. In 1990 a progression of assaults against the Bengali Hindus in Bangladesh happened in late October and early November. 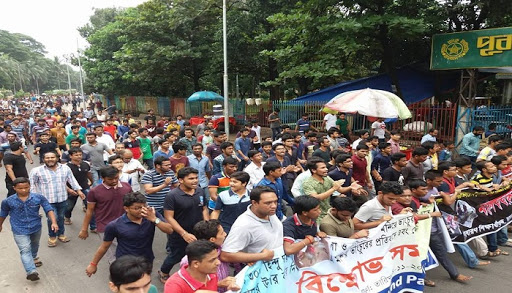 In Old Dhaka, Muslim dissenters endeavored to burn down Hindu Temples. Islamist crowds assaulted the Gouri Math and put a match to Hindu-claimed shops just toward the south of Bangabhavan. Following the same on 31st October 1990, One Thousand Muslim crowd walked to the Indian government office in Dhaka and beat up an old Hindu man simply outside the consulate.

Similar events took place in 2016 and 2018 where several Hindu temples were assaulted by Islamic mobs due to one or another reason. Back then Hindu temples were vandalized and seven idols of the goddess were destroyed. Weeks after over ten temples of the minority community Hindus were attacked in the Muslim-majority nation.

The motive behind the 2020 attack was because a Hindu Bangladeshi man, who lives in France, allegedly praised Emmanuel Macron for his strong steps against an Islamic attacker who killed a teacher in France. Prime Minister Macron had condemned the murder of Mr. Samuel Paty, as he showed his students the controversial Prophet Mohammed post, as an ‘Islamist attack’ and vowed to crack down on extremists who opposed freedom of speech in France.

Macron’s recent support for freedom of speech and his strict agenda to crack down on extremists have triggered protests in many Islamic countries. Terror attacks have really shaken up the state of France and the roughly 5 percent of the Muslim population in the country. Macron has not only refused to denounce the caricatures of the prophet in the Charlie Hebedo magazine, which resulted in the terror attack 5 years ago but also said that Islam was facing a crisis in one of his speeches. On the other hand, Islamic states have kept their eyes close to events happening in China and how CCP is torturing the Uyghurs Muslim population in the country.